Sometimes you have to talk to people about their problems. The incidence of this occurring rises dramatically if you become a doctor.

One of these problems is the finding that after giving birth to a child, it starts to turn yellow. This is rather unsettling for parents, and sometimes cats, and so they may ask you about (the parents) about why it’s happening. Given more than half of babies go yellow, this conversation tends to come up a lot.

Here I’ve written my two cents on how to explain it to Mum, and then some of the sciencey stuff underneath.

“Hi, my baby’s yellow, did I do something wrong?”

“Well, could you tell me what you know so far?”

Drop in a statistic like 60% of babies go yellow after birth, and it’s absolutely normal, especially if they came along a little early. Even more so if you’re breast feeding them.

The yellow is called Jaundice and it’s caused by ‘bilirubin’. It’s a normal breakdown product of the blood that the baby uses while in the womb, which is broken down after it switches to what’s called ‘adult’ blood. Since baby’s liver isn’t quite warmed up yet, this bilirubin builds up in the body, giving the yellow tinge. If it gets really really high, it can cause damage to the brain, so it’s good to check the level and make sure it’s just normal baby jaundice.

If the level is a bit high, we can use a special light that helps the liver to convert this bilirubin into the molecules that baby can then get rid of. Only 1 in 20 babies needs any treatment at all.

If it started after a day or so, it’s much more likely to be this normal baby jaundice, however if it started much sooner, it may be that we need to give the liver a bit more help, and we’d like to check that there isn’t something else going on.

It could be that the baby’s making too much of this bilirubin, or that there’s something stopping it being broken down. Infection can do this, or if the baby is dehydrated. There are other rare things that it could be, which it is always good to rule out.

If their poop is pale and the urine very dark, then it gives us an idea as to where the problem might be, and how to fix it. Also ask about any other symptoms (irritability, incessant crying, poor feeding)

7- Anything run in the family?

Family history may suggest a pattern that we can start treating early.

“Is it cancer?/Did I do something wrong?/Is it going to go back to normal colour?” All of these you can knock out the park with all that rapport and clinical acumen that you have.

– When did it start?

– Are they breast feeding?

– Any change in behaviour?

– Was mum on any antibiotics?

– Any problems after birth?

– Offer a plan and a follow up? (Usually – We’ll test the blood and see if we need to help the liver out, which most likely we won’t need to, and then if it doesn’t go away after a few days come back and we can have another look…)

Jaundice – or icterus – describes a yellowing of the skin caused by the build up of bilirubin.

Neonatal jaundice is normal after around 24 hours until around 2 weeks. This occurs for three reasons:

You can’t ignore neonatal jaundice, though, as it could be due to:

and severe build up of unconjugated bilirubin in the brain can cause kernicterus, especially in the basal ganglia

Bilirubin is fat-soluble, so it can cross the BBB and lead to kernicterus (encephalopathy)

If the amount of bilirubin exceeds the ability of albumin to bind it, then it can build up in the basal ganglia and brainstem nuclei

Kid’s that survive kernicterus can have

An interesting aside: Kernicterus used to cause a lot of brain damage in kids with really bad rhesus haemolytic disease, but since the introduction of anti-D immunoglobulin for rhesus-negative mothers, there’s not a whole lot of it around…

So that’s why we care about it – but how do you go about investigating a yellow baby?

Bad is the technical term 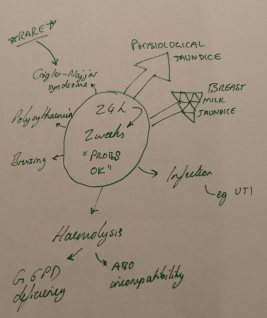 yeah your liver should probably pick up its game a little

If jaundice has kicked in within 24 hours, it’s likely there’s a haemolytic process afoot. This is important to spot as it can get a lot worse very quickly:

If the jaundice is after 24 hours and up to 2 weeks, then this is most likely the physiological jaundice described above. The way I remember these ones is the noise the minion makes when it’s got that stupid light on it’s head in Despicable Me 2 “BIIDOOO BIIDOO”

Testing the jaundice is a logical next step – you can do it:

Like a sinking yellow ship it’s nice to know how bad the situation is, and how quickly it’s getting worse. Usually the level rises in a linear fashion, so keep these plotted on a chart somewhere so you’re not caught by surprise.

If you’ve given a newborn a sulphonamide or diazepam then these can displace bilirubin from albumin and make the jaundice worse. Don’t give these to a newborn. It’s silly.

So what to do?

There are 3 key things to do with a yellow child, after you’ve checked it isn’t an unfortunate highlighter incident:

The mainly used one is phototherapy, where 450nm light is used to convert bilirubin into different isomeric configurations that are water soluble. In exchange transfusion the baby’s blood is swapped bit-by-bit with donor blood. We don’t know at what level kernicterus becomes inevitable, so basically keep it as low as possible.

It won’t stop! – jaundice beyond 2 weeks

Persistent/prolonged jaundice might be due to biliary atresia, which is the main concern, but it is usually an unconjugated hyperbilirubinaemia due to:

How do I know it’s conjugated?